Jacques was born in 1704 in Mans, France. He was the son of Jacques Saurette and Marguerite Baril. He married Catherine Laporte January 7, 1741 in Chambly, Quebec, Canada. Jacques died October 10, 1790, in l’Acadie, Quebec and was buried there as well.

View a copy of the marriage certificate along with the English translation.

Jacques was the first of my Saurette ancestors to travel from Europe to the New World. He came over in the capacity of a soldier and was stationed at Fort Chambly. He and his wife had a large number of children, helping to increase the population of the colony of New France. Jacques became a widower in 1774, but he remarried. As far as I know, there were no children from his second marriage.

Below is a little bit of background concerning Jacques, his profession and his name. 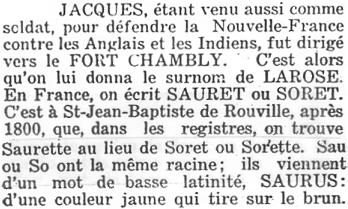 Jacques also came as a soldier to defend New France against the English and the Indians, was directed toward Fort Chambly. At this point in time, he was given the nickname Larose. In France, one writes Sauret or Soret. It is at St-Jean-Baptiste of Rouville, after 1800, that, in the registers, one finds Saurette instead of Sauret or Sorette. Sau or So has the same root; they come from a Latin based word, saurus: a yellowish-brown color.